You will be utterly shocked and moved to action after reading the information in this section.

Our hope at Firestarter Ministries International is that you will partner with us and together we can make an eternal change in this world!

The Mission of Firestarter Ministries International is to help every person come to know Jesus personally, to know their identity in Christ, to belong to the family of believers, to become discipled, and to build God’s kingdom. Firestarter Ministries International exists to support and extend the evangelistic calling and ministries of the Church through prophetic ministry and proclaiming the Gospel of the Lord Jesus Christ to all we can by every effective means available to us and by equipping the Church and others to do the same.

Most of the unreached people groups are located geographically in what some scholars call The 10/40 Window from West Africa across Asia between 10 degrees latitude north of the equator to 40 degrees north.

60% of unreached people groups live in countries closed to missionaries from North America.

Over 1,000 unreached people groups are NOT in the 10/40 Window, these total over 80 million individuals. 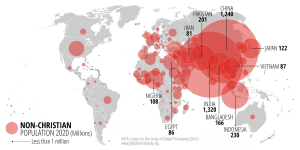 Evangelicals have grown from only 3 million in AD 1500, to 550 million worldwide, with 54% being Non-Whites.

There are 900 churches for every one unreached people group.

There are 78,000 Evangelical Christians for every one unreached people group 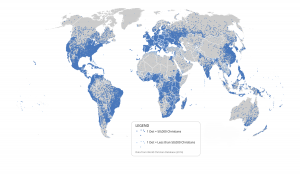 There are estimated 6,909 Languages worldwide.

4,400 languages are without Scripture portions available, with some 634,000,000 speakers. Translation projects are in progress in an estimated 1,600 languages that currently are without adequate Scriptures. There are about 2,500 languages needing Bible translation work to begin. (joshuaproject.net)

Of the world’s approximately 6,900 languages, 4,765 have at least one of the following: Bible portions, the Jesus Film, Christian radio, or Gospel recordings. Total speakers of these languages is 6.2 billion which represents over 95% of the world’s population. 2,135 languages have none of these resources available, with about 195,000,000 speakers. 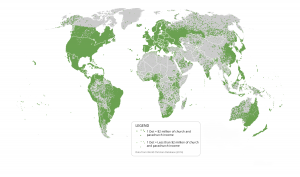 Given to Missions: $45 billion

HOW CHRISTIAN GIVING IS USED

Evangelical Christians could provide all of the funds needed to plant a church in each of the 6,900 unreached people groups with only 0.03% of their income.

If every evangelical gave 10% of their income to missions we could easily support 2 million new missionaries. SO WHAT DOES ALL THAT MEAN TO ME?!!

Let me ask you this, “Is God to blame for not “Calling” People to Missions?”

If everyone is obeying God’s “calling” to be a missionary wherever they are then God is calling 99.9995% of people to work among the 44.3% of the world population that already has the Gospel, and calling virtually no one (.0005%) to relocate among the other 53.7% of the world population that are not Christian. You have a better chance of being in a plane crash than being one of the few missionaries to the unreached out of the total 2 billion Christians in the world.

In light of God’s Word, this seems unfathomable and it appears to be almost complete disobedience on the part of the Church worldwide to go make disciples of all the nations. Financially we are hoarding 99.99% of our income to ourselves and what little is given is mostly directed toward reached people groups.

The current status quo is to do virtually nothing to reach the UPG’s of the world. The percentages of man-power and money focused on UPG’s are almost undetectable they are so small. The amount of resources that fall off the Christian table for unreached peoples is more comparable (I Googled it…) with the number of skin cells you lose over a month’s time: something hardly worth calling a sacrifice of the body.